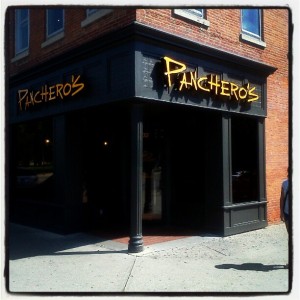 I have no idea if Chipotle stole Panchero’s idea in 1993 when they started, but they did. The actual style for this type of restaurant is Fresh Mex, but that sounds stupid.

Panchero’s is a chain of Mexican joints, 55 in all, the first of which is this location. It opened in 1992 and is nestled between the University of Iowa campus and the famous “Ped Mall”. My dad took me to a campus tour in 1996 to check out the school. Our final stop on the visit was Panchero’s, my first collegiate crush. If I hadn’t already decided to go to Iowa when I saw Ronnie Harmon carry the ball in 1985, this would’ve sealed the deal.

Throughout my four years in Iowa City, I would say I consumed a small farm’s entire livestock in Panchero’s offerings. I’ll admit, most of the stops were made around 2:04 a.m. (the bars closed at 2:00). All of the orders, though, from the first time I went, to my last when I was in Iowa City for a football game last year, were burritos.

This isn’t burrito tour, though, so I had to shed my old ways and try the tacos.

The first thing about Panchero’s is the tortilla. They press a fresh flour tortilla basically right in your face. They’re awesome.

I tried two tacos, the steak and the pork (so white). They’re pretty big. The steak meat is cut into nice size chunks and is very good. It’s seasoned nicely, but does lack a little grill flavor. The pork is good as well, but kinda falls apart and makes a mess. It isn’t dry, though, which beats most places’ carnitas. 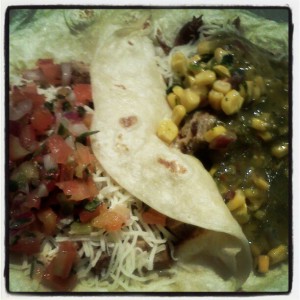 As for the toppings, you choose your own, just like, you know.

I still prefer their burrito, but I have to admit, they make a pretty good taco as well.