From the worst stop on the tour to one that ties Moran’s and Big Star for number 1 on my list: L’ Patron Tacos. After a wild night of working up a hunger by knocking down pins, impressing ladies with my biceps and slamming terrible beer, I took my princess and her brother out for some tacos.

L’ Patron is a relatively new spot. It’s generally pretty crowded, mostly because it’s very small, and a little because it’s super good. I’m not sure why there would ever be a half-hour wait for tacos at a taqueria, but there is routinely here. So, if you’re going to go during a prime dinner time, plan accordingly. So, how ’bout them tacos?

They’re VERY good. I tried the carne asada first. The meat has a nice seasoning and great grill flavor. It’s juicy as well and they don’t skimp on the meat. Next was the al pastor. The pork is cooked well and is very sweet. If I had to knit-pick, I would say it could use more spice (cuz, you know, I’m a taco diva), but overall it is an excellent taco. The star of the show, however, is the pescado taco. The tilapia is fried, but the chunks are nice and big and not too crispy. You can taste the fish. Basically, the opposite of most fish tacos which hide behind the slaw on top.

This place has great tacos, but the overall experience could be upgraded. First, they don’t have any alcohol (I know, right)! Second, they don’t do the chips and pico thing. Third, and last, on my bitch list, is the attitude of the sassy mujer working the register. No me gusta! 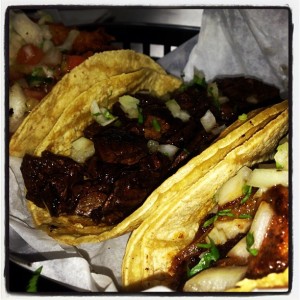 The other non-taco items on the menu are good as well. The burrito and is great and so are the gringo and gringa. FYI.

One thought on “l’ patron tacos”