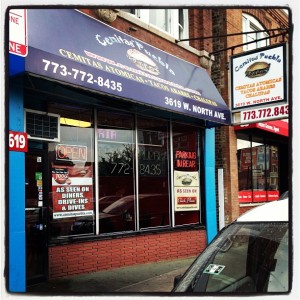 Yes, I took this picture while on top of the hood of this mini van.

Cemitas Puebla has been on my radar for a while. It continuously shows up on lists of the best taco places in Chicago. So, I got my most superhero esque friend Glen, and headed down to Humboldt Park. In order to look like mortal men and not stick out, we rode our bicycles.

Cemitas Puebla is a small, authentic Mexican joint on a street, and in a neighborhood, with many to choose from. At first glance, it doesn’t separate itself from many of those other spots. The real difference, though, shows itself in due time.

We walked in, placed our order at the counter, and sat down to wait for the food. They don’t have chips of pickled veggies, so we sat and argued about video games, like most people of our stature.

My order was a little different than normal. I still stuck with the carne asada, but also ordered two specialty tacos: the Governor Precioso, and taco arabes.

The asada is just how it should be. It’s seasoned well and the meat is cooked perfectly. The taco is juicy and has a little char on the outside. The only thing it could use  is some smoky grill flavor, but this is still a very good taco nonetheless.

The Governor Precioso (translates to ‘my dear Governor’ – a reference I don’t understand) is a combo of asada and chorizo. It’s the same asada I had previously, so I was obviously happy with that. The chorizo, in addition, is outstanding. It’s made in house and is nice and spicy. You can see flecks of red chile throughout the sausage. My only regret is that I didn’t order a chorizo taco on its own.

My final taco was the taco arabes (translates to Arab taco – again, I don’t get it). This is a spit-roasted pork taco. The meat itself is similar to an al pastor taco, but their seasoning and sauces are different. Here, it is served with onions (no pineapple) and a chipotle salsa (rather than a chipotle marinade). The salsa is fiery hot and is one of the staple ingredients of the restaurant. The taco has incredible grill flavor and maintains a juicy consistency.

One more thing: Their big feature is the cemita. For all intents and purposes, it is similar to a torta, but I think is much better.

The cemita is a sandwich on a sesame seed bun with the meat of your choice. It’s topped with avacado, chipotle peppers, Oaxacan cheese and popalo (a Mexican herb that tastes like a cross between parsley and cilantro). It is truly awesome. They claim to be the only place in Chicago to serve cemitas, so you’ll have to stop by. 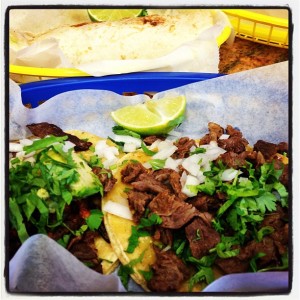 My dear Governor, I love your taco!?!

I’m not sure what took me so long to come to Cemitas Puebla, but I can promise you I’ll be back soon.