Those stucco walls can barely contain the excitement!

Alright, this one’s gonna be about life lessons. Specifically, these two: don’t settle…and, don’t ever listen to a vegetarian when getting advice on Mexican food.

I recently took my princess to California. Knowing there is an abundance of Mexican joints there, I just knew I could find places to go all over the place. There’s Mexican food on every block. That doesn’t mean good Mexican food, though, unfortunately.

Let me set the scene:

Upon arriving to my friend’s house (the aforementioned evil vegetarian) in Hollywood, we were starving. I had my sights on two taco places in particular: Guerrilla Tacos and Tinga Tacos. I’ve heard great things about both (thanks to my foodie friends Glen and Gina). Unfortunately, they are both about 20 minutes from where we were. We settled (problem #1) on a place just down the street, which was recommended to me by my hippy, meat-hating friend (problem #2). That place is El Compadre Restaurant. When I put a photo of the place on Instagram (follow me: tacotourist), Gina immediately commented, “Oh no! Not there!! Food is not good :-/”

When we arrived, we first noticed that the ambiance is very strange. It felt like I was at an Italian steakhouse with all of the excitement of bingo night at a Sunrise Assisted Living center. It’s dark and emotionless. The only thing we could pay attention to was the D-bag businessman who had too many tequila shots. He was shouting out ideas about how to climb up the Forbes list, detailing one bad idea after another.

Nonetheless, we were there, hungry, and ordered our food.

I’m not going to drag this one out (any more than I already have), but let’s just say that Gina is right. I tried the carne asada, the shrimp, and the carnitas tacos. None of them are good. The carne asada and the shrimp are very bland, and very, very messy. They look more like a walking taco (thank you public school lunch!) by the time you’re halfway through the meal. Even the guacamole, which I believe you have to serve on tacos in California, by law, is sub par.

The carnitas taco, however, isn’t bad. It’s terrible. The meat is so overcooked it’s crunchy. It’s like the french fries on the bottom of a McDonald’s order. You know, the stuff that’s dark brown with no potato whatsoever? Only, this stuff isn’t as good. At least the Micky D’s fries have salt on them.

Bad choice all around…with the exception of their margaritas. Those are very strong, and pretty tasty. Maybe most patrons get so drunk, by the time the food gets there, they don’t even know what they’re eating?

Maybe I should’ve used the salt from the rim of my margarita on the tacos. I guess that could be lesson # 3… 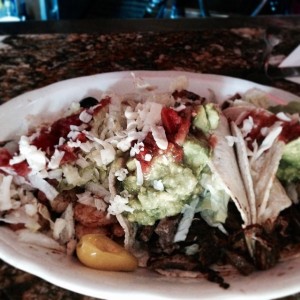 Oh, the tacos come with a pepper and an olive too. Very Italian…

Alas, there are more fish in the sea, and hopefully better Mexican joints in California.

On to the next stop.

One thought on “el compadre restaurant”