First, I’d like to apologize to my millions of readers for my hiatus. I know many people have been holding their breath, waiting for my next post. Those people who held their breath are, well, dead. To the rest of you….here’s what you’ve been waiting for!

I recently went on a weekend binge to Las Vegas. What better way to break up a binge than to eat some tacos? So, a group of my friends and I visited the Pink Taco, located at the Hard Rock Hotel. I’ll save the lame wise cracks on the name and let you come up with the euphemisms.

I was pretty excited about this stop on the tour because I really like this restaurant. Liking a restaurant, though, does not automatically equate to a good taco joint, which is what I quickly found out here. I won’t dwell on it, I’ll just get straight to the point.

First of all, the tacos are pretty darned expensive. Orders are between $14 and $18 each, which includes three tacos, rice and beans (they also have a $24 burrito). Also, you cannot mix and match. Luckily, I have good friends who were willing to trade tacos with me.

Now, don’t get me wrong, they do use quality ingredients, but for what you’re paying, you could find a date in one of those lady catalogs they hand out on the street. I sampled three types: shrimp, tuna and fish.

The shrimp is my favorite. They’re seared in a chipotle sauce and topped with serrano, red cabbage, cucumber and tomatillo salsa. The shrimp taco has the most meat in it and goes further than the others. The shrimp must be too crowded in the pan, though, as they fail to get the crisp sear they deserve.

The fish taco is ok. It’s a decent sized hunk of flesh and is topped with a serrano and cilantro salsa, shredded cabbage, sour cream and pico de gallo. The ingredients sound very good, but it’s nothing more than an average fish taco. I’d say that’s what you’d expect in the desert. But this is Vegas. I expect more.

The tuna taco is by far the most disappointing. The meat is raw, which would be fine at Nobu, but in a taco, I’d prefer a little sear. It’s also extremely small and comes in a teeny crispy tortilla. I’ve had taquitos from 7-11 that had more meat…and flavor, for that matter. You’d think the lime and serrano cabbage, chipotle vinaigrette, and avocado would help…but they don’t. Overall, a very big let down.

Luckily, the rest of the weekend was a success. I didn’t win a million dollars, but more importantly, I didn’t lose a million. 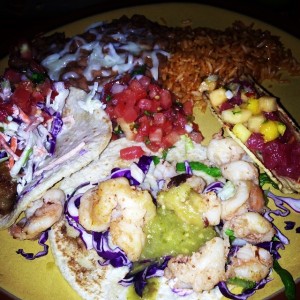 Look at the little wiener taco on the right…what a wimp!

Remember, what happens in Vegas, stays in Vegas….except the diseases.

On to the next episode!