Yesterday, my lil’ doggie, Julio, broke his arm. There isn’t any great story to it. I didn’t get mad at him for eating my socks and punt him across the room. I didn’t find him drinking out of the toilet he could never reach and break his arm over my knee. He didn’t save my life fending off an intruder. Nope. He just fell off the bed.

After calming Julio (and Julia) down, we dropped him off at the vet and went on a stroll through the West Loop. On our way to find lunch, wouldn’t you know it, a taco place found us. De Cero Taqueria isn’t a normal taco place, like we’re used to in Logan Square. It’s a fancy one with cloth napkins, $6 salsa, and portfolio conversations. So, I grabbed the lasted Wall Street Journal and we headed in.

De Cero has several taco selections, and many of them change from time to time. They are all impressive sounding. They have various toppings to match each taco meat or veggie. I ordered four tacos: the skirt steak, the braised beef, the catfish and the duck confit.

Here’s the deal. In a city with the likes of Big Star and Antique Taco, De Cero really needed to pull through with some bold flavors.  They do a good job, but I don’t think quite stack up to the others.

The braised beef taco is very good. The beef is stewed like a nice roast and is very juicy. You also get a lot of meat on the taco. It has some caramelized seared green beans on top, as well as cilantro, onions and queso fresco.

The duck confit is also very good, but the toppings don’t add much. The corn and cilantro don’t stick out. The duck meat itself is wonderful, but I’m not sure it fits with the other ingredients on the taco.

The catfish sounds and looks really good. It comes with a Mexican slaw and chipotle mayo. The problem is how they cook the fish. It’s fried and comes out mushy. Too much oil gets through the breading and into the fish. Icky.

The skirt steak is pretty bland. I was excited to see it paired with potatoes, but there is a lack of flavor in the taco. Both the skirt

steak and catfish have a chipotle mayo, at least on the menu. I couldn’t taste it on the tacos, though. Weak. 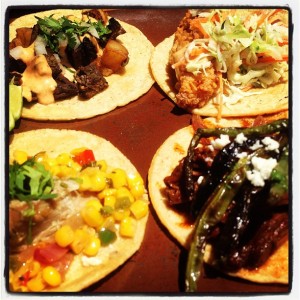 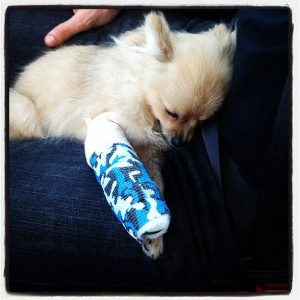