Posted on October 4, 2014 by tacotourist

All of my friends who celebrated National Taco Day with me…

It’s Saturday, October 4th, 2014. Do you know what today is?…other than the last day of my father’s 64th year on Earth? (Happy Birthday tomorrow, padre!)

That’s right, today is National Taco Day. I couldn’t skip going to a taco joint today. Wouldn’t be right. But where to go?

Well, I’m going to a party at my friend Justin’s later on today. Yes, as in the Justin that accompanied me on my very first Taco Tour stop. He’s gained legendary status in the Midwest and Mexico since then.

What does that have to do with anything?

Well, at one of the first parties I ever went to at his current crib, a co-worker of his told me about a place called Don Chema, which is all of about 2 blocks away from my apartment. I’ve passed it a million times. So, why haven’t I reviewed this place? And why have I never been there?

Because I was told it is the worst, dog-food wannabe Mexican garbage in all of Chicagoland. So, I haven’t really made it a point to stop by…..until, today. I dressed like it was January, braved the cold, rainy, windy autumn day, and made the quarter mile jaunt to check it out.

So, was this friend-of-a-friend, who I’ve met one time for a grand total of about three hours, correct?

Nope. Not even close.

Don’t get me wrong, it’s not the greatest place on Earth, but it’s really tasty. It’s a little more expensive than Moran’s, and not quite as good, but it still stacks up against most of the places in Logan Square.

The first taco I tried was the camaron. It’s the taco I enjoyed least on my visit. The shrimp is cooked very well, and there is a large amount of it in the tortilla. It is also topped with two nice strips was fresh avocado. But, it didn’t have a ton of flavor. I liked it, but compared the others I tried, this one wasn’t on par.

Next I had the carne asada. I really like the char flavor the beef gets. Seasoned nicely, and again, a large amount of carne on the tortilla, make for a very nice steak taco. If I had one nitpickity tidbit to add (which I do) I would like to see the meat cut into a little larger chunks so you can get more beef flavor and texture. But, still, a solid taco.

Then came my favorite: the chorizo. Theirs is house made and has all of the qualities of a great chorizo. It’s smoky, paprika-y, spicy and not too greasy or sloppy. It also has a warm spice added that tastes like cinnamon or clove. It isn’t overpowering, but adds just a little extra depth and comfort to an already delicious pork product.

Last, I tried the roasted pork, which is their al pastor. Another success. Roasted juicy pork cooked to perfection with a chipotle marinade and topped with grilled onions and pineapple. Yumm-oh! (Did i just infringe on a Rachel Ray copyright?) I could use a little more spice, but I’d still eat it as is any day of the week.

Overall, this place is a great taco spot, and I’ll definitely be back.

I guess that’s the last time I’ll trust a guy I don’t even know…at least until tonight’s party. 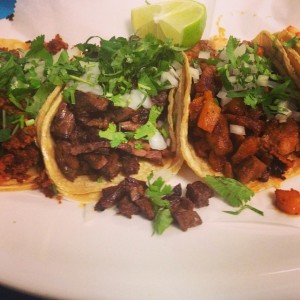 Dog food? I think not!

See ya at the next stop.